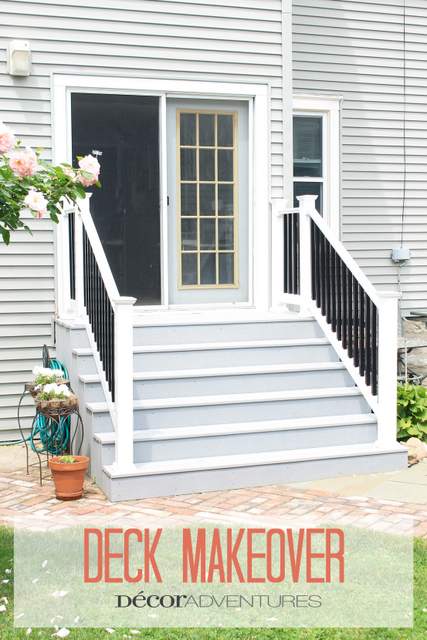 If you read a lot of DIY blogs, you probably have wondered at some time or another

How do these people make and build and do all of these things themselves?

I’m here to tell you a secret.

Sometimes we don’t do it all ourselves. There are certainly tons of home improvement projects that are way beyond my set of skills. And I’m a firm believer that there is no shame in hiring out. It only makes sense. Financially, time-wise, and experise-wise too. We did this for our front porch floor and more recently for our backyard deck.

We had our backyard makeover over the course of about a year and one major project was getting a new deck. The old one was falling apart. We took it apart – Ok Dan took it apart – in about 10 minutes with a hammer. And that’s when we discovered how not to build a deck. The wood was splitting, paint was peeling, it was a mess. 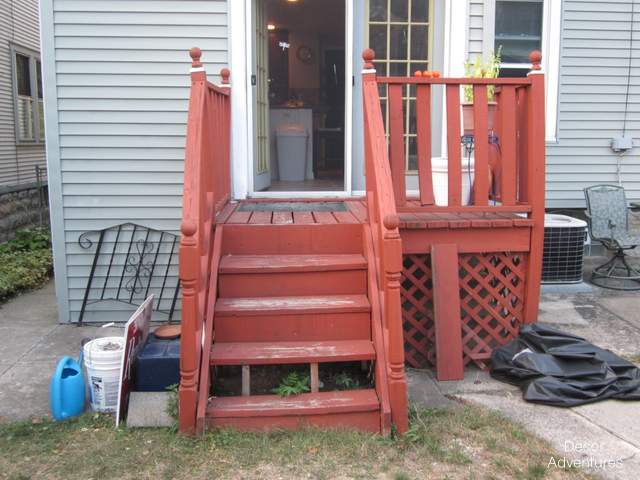 After it was all gone, we had this, the original concrete stairs that lead into the kitchen in the back of the house. It was not only unsafe but ugly, and the steps did not lead up to the house at the right height. We couldn’t really figure that out, how the cement stairs really even worked, but no problem since they were getting covered anyway. 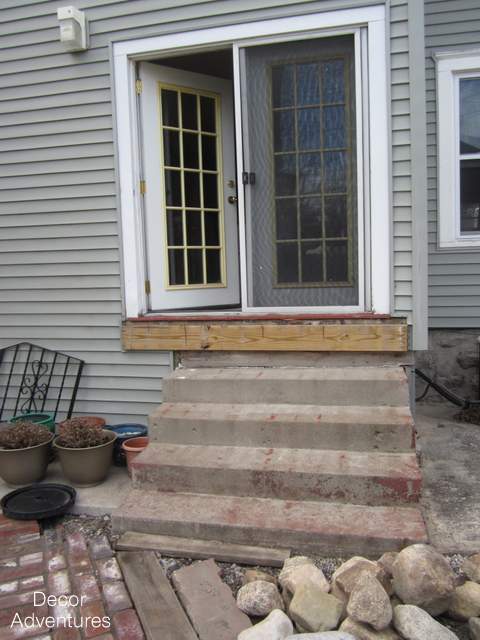 In came our helper. Jeff, on the right. We had this built in October, so Jeff came over every day for a week after we bought the materials and got to work building something new so we could finally walk out the back door.

The deck was the last part of the backyard plan that was done. It went up after the flagstone and brick patio, but before we put in the new grass. 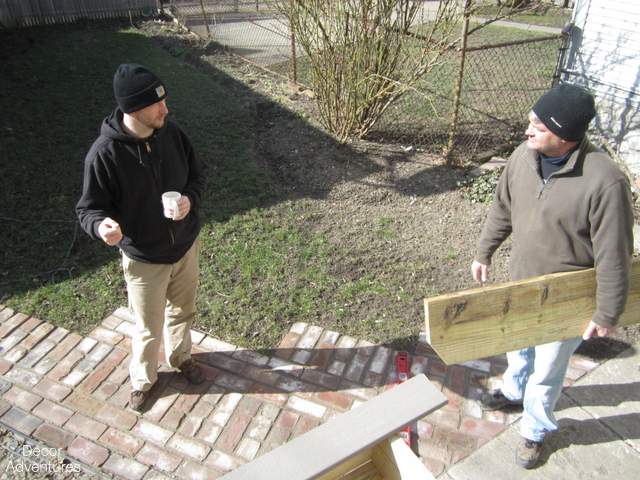 The old deck had only a narrow staircase to walk down so we ultimately decided to widen the stairs to make them the width of the entire deck, rather than just a part. First we thought about making a set of stairs to go straight out the door, and over on the left to the cement pad we kept, but realized that would take up too much space. So one set of stairs it was.

If you’ve seen my Outdoor Living board on Pinterest, you’ll notice how I liked the look of cable railings, but when we went shopping we saw you can only use those with wooden posts. At least that is what’s available in the stores. We didn’t want to build a wooden deck since we didn’t want to deal with the maintenance quite honestly, and ultimately decided on a material found at Lowes called ChoiceDek. It’s 95% recycled material, which I loved and was something our builder could work with. We selected the Beach House Gray and the pressure treated wood was for the frame of the deck. 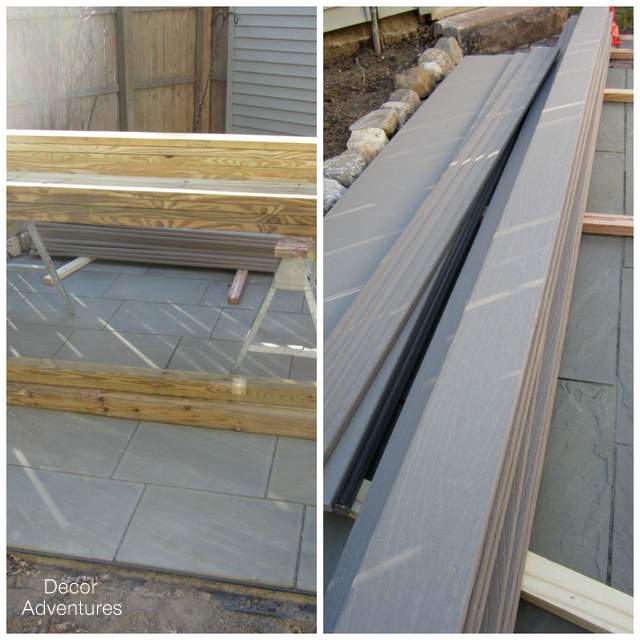 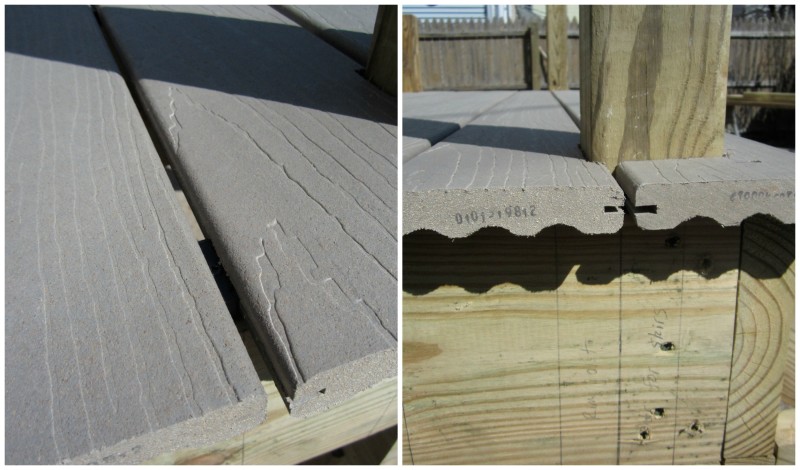 This is not a tutorial on how to build a deck, it’s really just some pictures of how ours was built. That was the fun part, taking pictures while a major project got completed in your house.

First went up the frame and stair stringers. There were some joining pieces that went in under the 4x4s and along the frame. The black spacers are what is used in between the ChoiceDeck boards to hold them together from underneath. 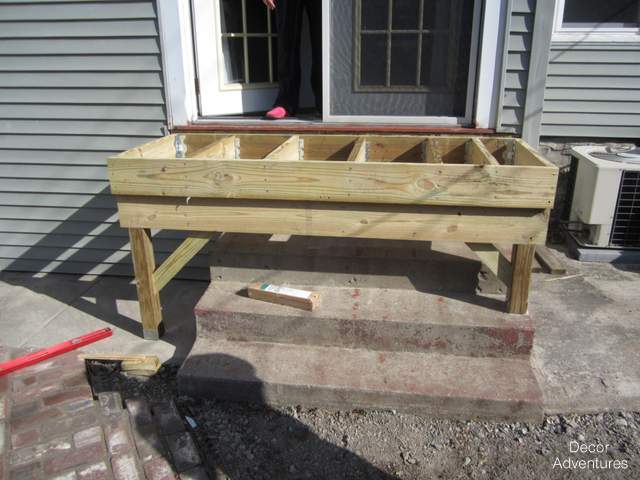 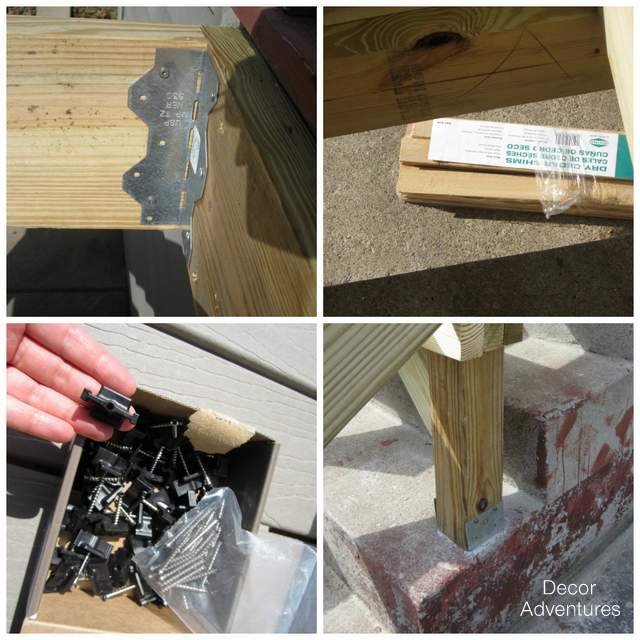 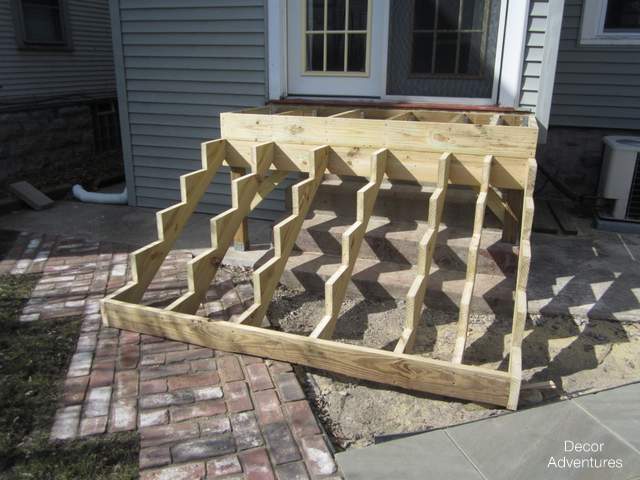 As the days went on we had more pieces come together. Up next was the ChoiceDek materials for the actual floor, stairs, risers and sides of the deck. Jeff did a lot of testing to see how much material would be needed and how it would fit. 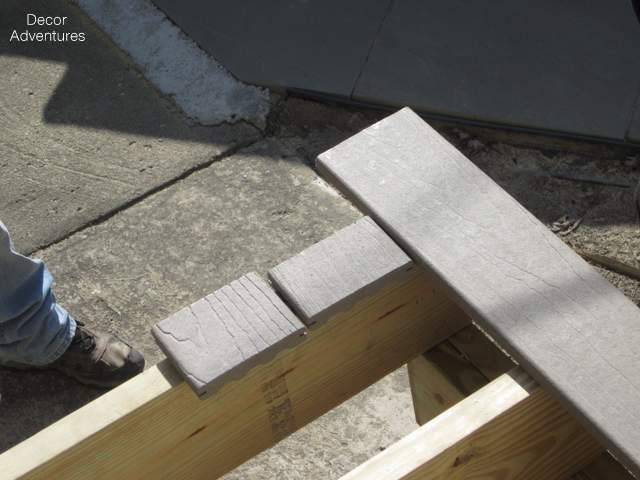 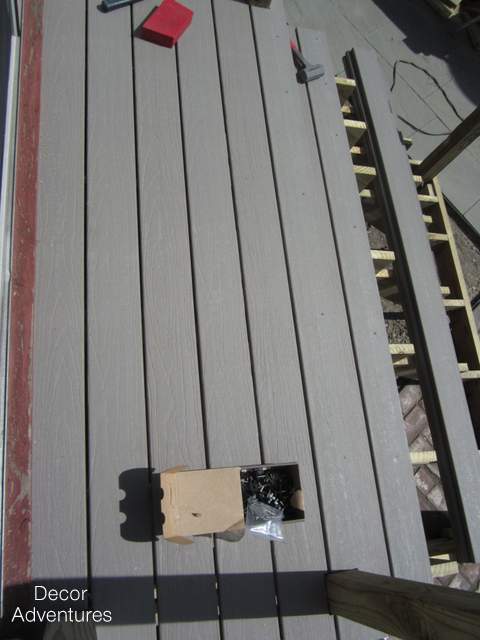 For the railings of the deck we choose white covers for the 4x4s and black for the smaller railings that go in between the posts. I loved the simple and classic look of it. The white covers go over the wooden 4x4s and eventually we might add lights to the tops of them, which is great there is that option. 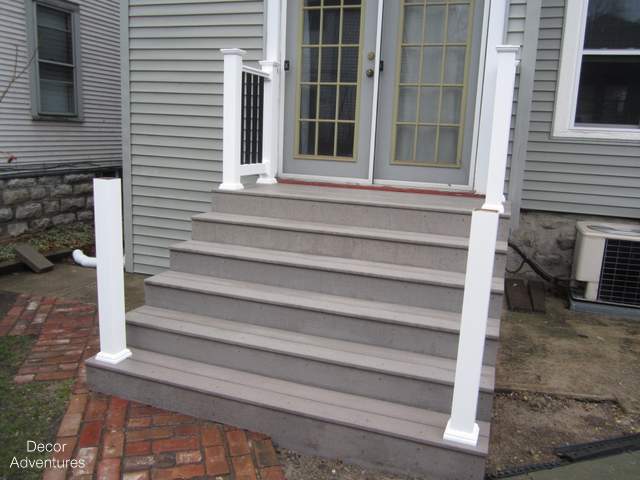 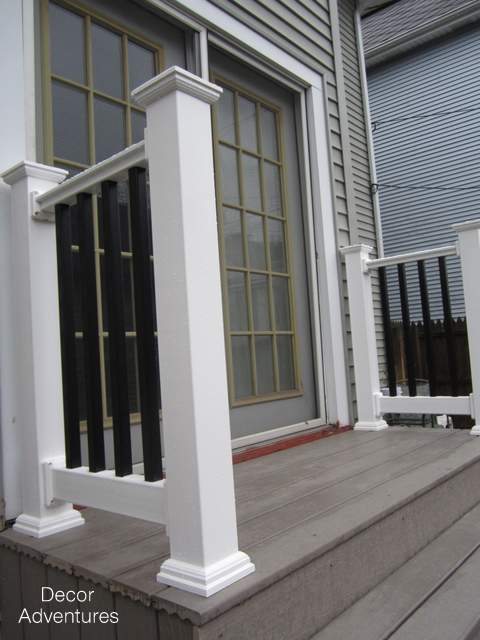 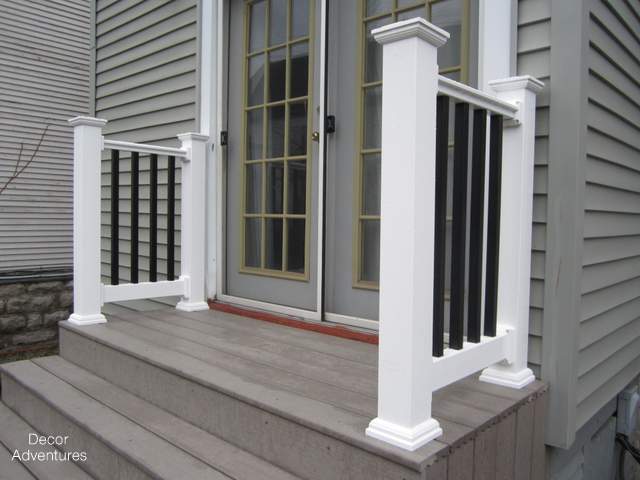 The materials even goes on the side of the deck, which covered the last view of the old dirty cement. We had the holes that were left in the spaces under the deck with leftover flagstone and sand.  This was when it really was starting to look like the deck we imagined. In a few days the deck was all done. 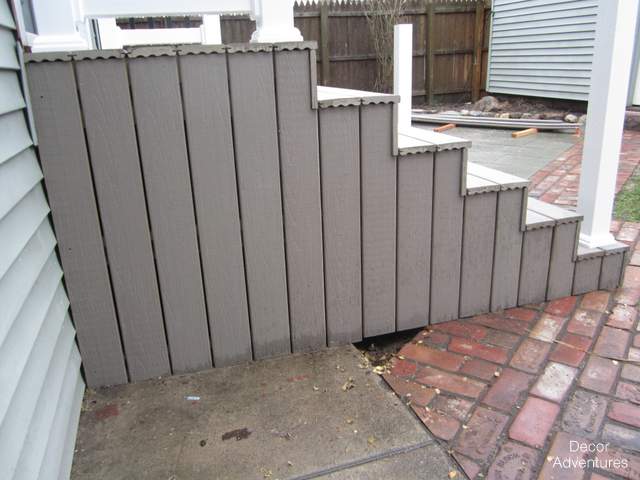 A few days later it was all done and it felt great to have a little break from DIY for a while. There are just some things we didn’t want to tackle ourselves. Of course we paid for the labor and materials and when it was all done we just had to wait until spring to grow grass and work on the landscaping. 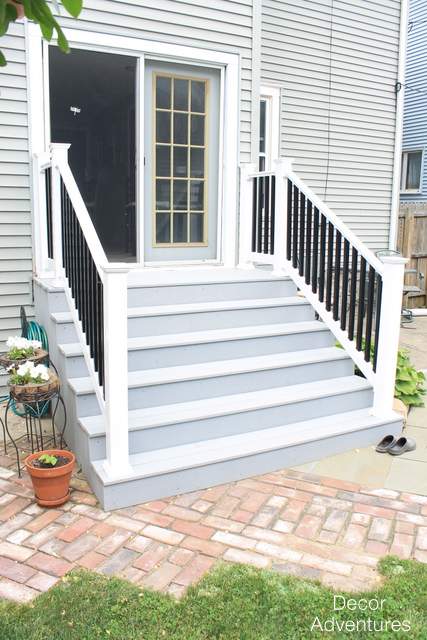 What a before and after! 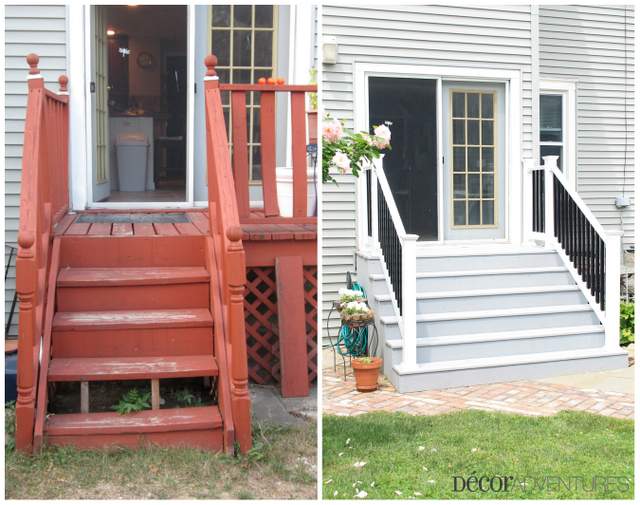 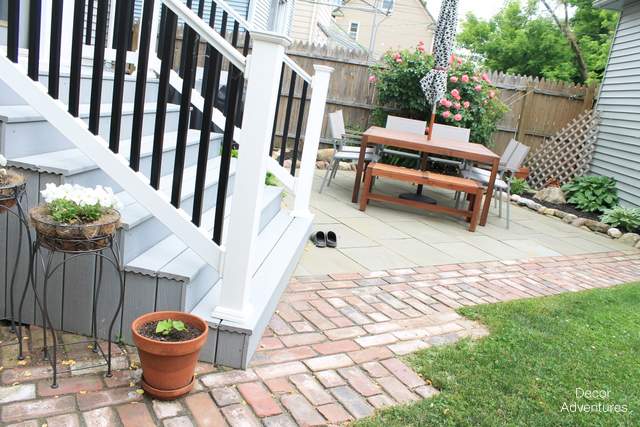 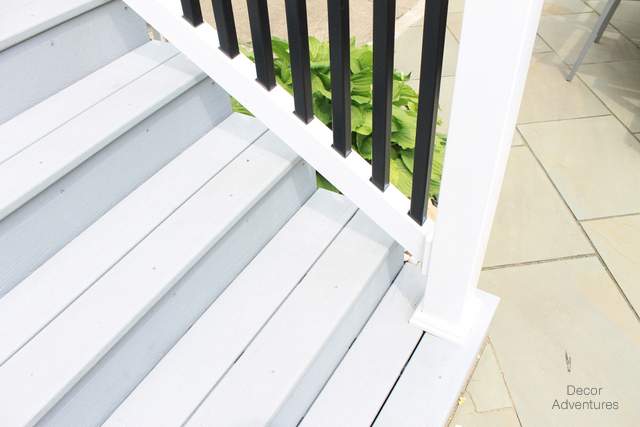 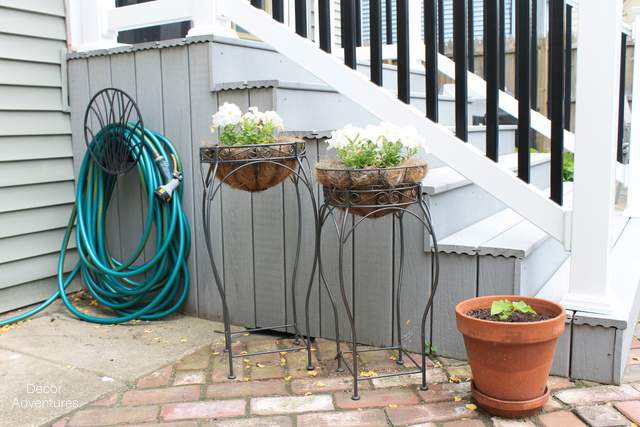 Now I promise that is really the last of the outdoor projects. Considering we are getting near fall (have you heard the pumpkin spiced coffees are out?!) I’ll be planning to do some seasonal crafts. And I have an office makeover that I’ve been planning to show you forever!

Come back later in the week to see my Signature Style, a series which I’m participating in with Making Lemonade and a number of other fabulous bloggers.

See my other outdoor projects below:

Disclosure: This is NOT a sponsored post. I was not compensated in any way to use or talk about the ChoiceDek product. It’s just what we used and liked.