Happy day after the blizzard! If you’ve kept up with me on Facebook, you’ll know we’re getting some wild weather in Upstate New York. But I actually like the cooler temps, because they are the perfect time to do indoor projects, like makeover an entire hallway with a stencil like I’m about to show you today!

Although I love the walls in my old home, I was getting a little tired of their lack-luster look and decided a stencil would be the perfect opportunity to spice things up. Cutting Edge Stencils sent me the Heritage Grill Allover Stencil to try out and I couldn’t be happier with the makeover I did on not one, but all four walls in my upstairs hallway. I thought the hall was a great place to have a little fun with a stencil so off I went. 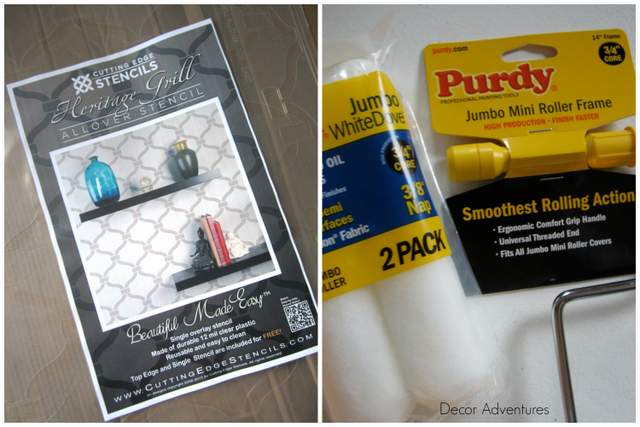 I did use stencil adhesive, which is sold in craft stores, and it helped to keep the stencil flat while I used the paint roller.

First I stenciled that space, then moved the stencil directly below it, lining up the openings where the next section would go and stenciled that part. I worked my way straight down the wall until I got to the bottom. That way there was minimal overlap of the stencil and less chance for smearing, and the top part of the wall was dry for me to move on to stencil there.

I continued to work this way all around the walls. At the end of the first day, I made sure to do as many parts of the walls as I could, so they would dry overnight and I could overlap the stencil to complete more of the walls.

Since this is a hallway, I had lots of incomplete sections to stencil. Versus one large flat wall space, I had seven doorways to work around, and nine foot ceilings. Talk about lots of moving of the stencil!

At the end of the first day this is what I had. Mostly completed areas, with lots of trim to finish up. 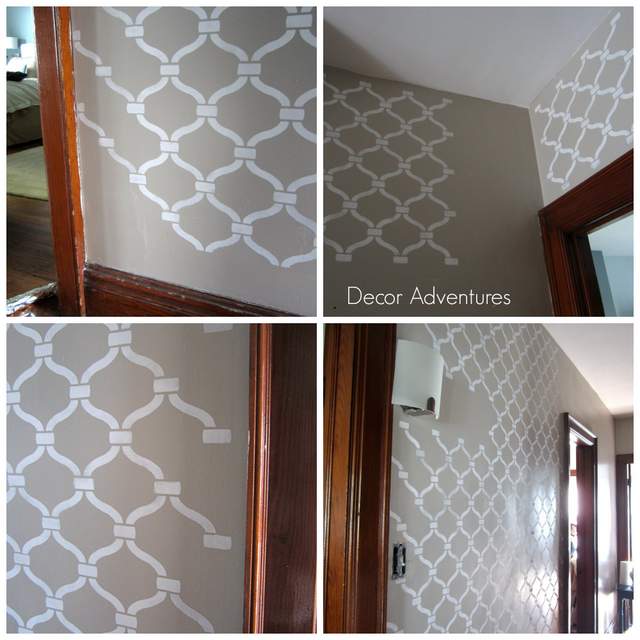 Thankfully Cutting Edge Stencils provides a top part and small section of the stencil for you to use for just this part. And my particular stencil was such a repeat pattern, that it worked perfectly for me.

One way I found worked best for the trim against the door frames and along the baseboards was to sponge on the paint. I simply held or taped up my stencil part and dipped a piece of foam {from upholstery} lightly into the paint and then sponged it onto the wall on the stencil. It worked perfect and went pretty fast. Since there was a lot of this to do, I did as much as I could one day and then waited overnight for it to dry before continuing on parts that overlapped. 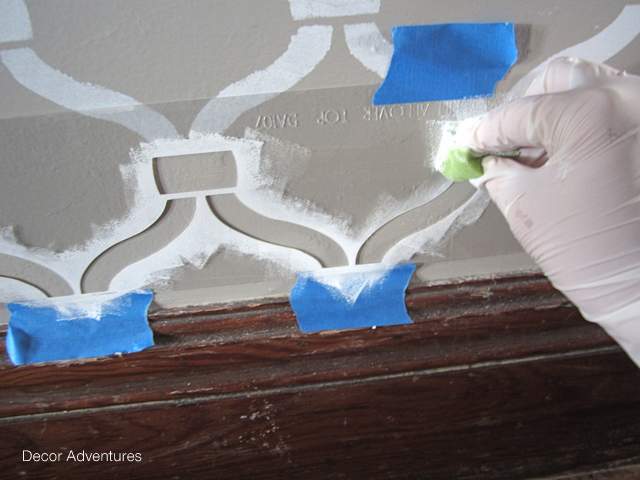 I wanted to make one note about the paint. I had heard that using chalk paint for a project like this will work great and smear less, so I did use chalk paint. While I love the flat look on my walls, the chalk paint dries differently on the stencil and thus will flake off throughout the process. This is by no means a fault of the stencil, it holds up great, however as Cutting Edge Stencils recommends, use latex or acrylic paint very lightly for stencils. See their videos here.

This project took me two weekends of stenciling, but of course that included sleeping in, dinner out, breaks in between and all kinds of other activities. It was not 4 solid days of stenciling and actually Dan commented on how fast it went. Did you see my updates on Instagram?

Now I will stop blabbering and get to the after pictures! First, above the doorways. I love the way the stencil “ended” so cleanly at the ceiling and above the frames. Like it was meant for my hallway! 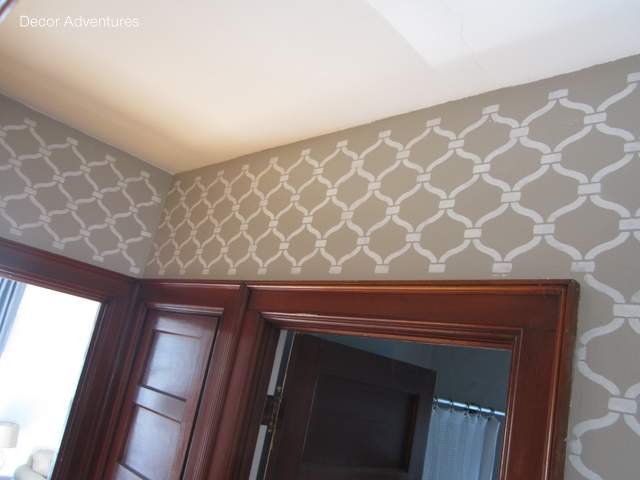 Here is the largest wall space. I love seeing the large expanse of the pattern on the wall. I’m totally happy with how it came out. 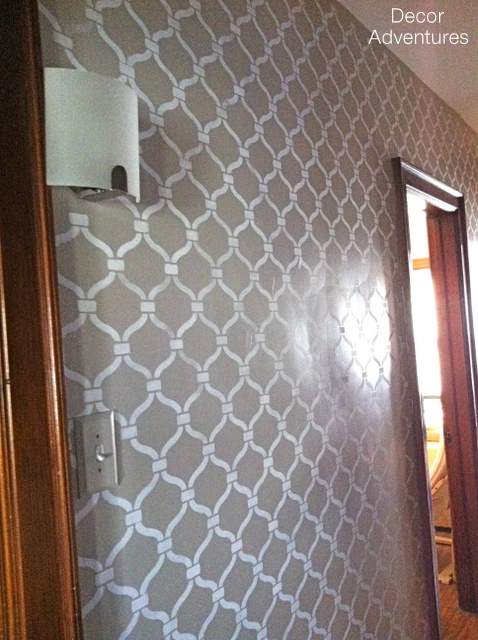 This is a view of that same wall when you are walking up the stairs. I stenciled under the light switch and around the sconce as much as I could. 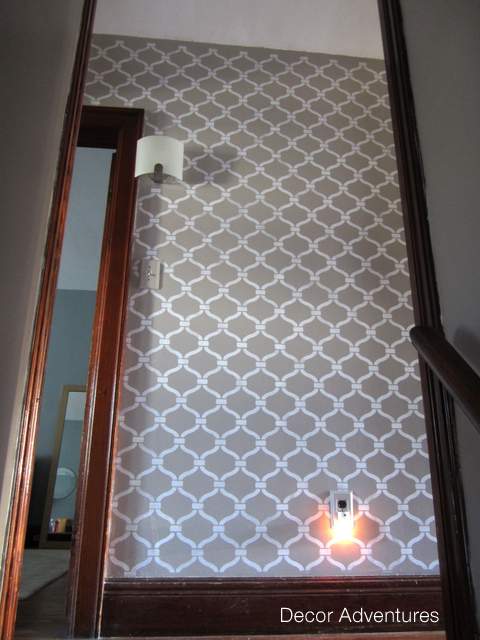 Here is a closeup of the stencil on the wall. You can see how crisp the lines come out using a roller and the subtle variations in the paint, which I actually love. They give it some depth. This is a very accurate color portrayal of Creamy Mushroom by Behr, the wall color, and the Pure White by Annie Sloan, the stencil/pattern color. 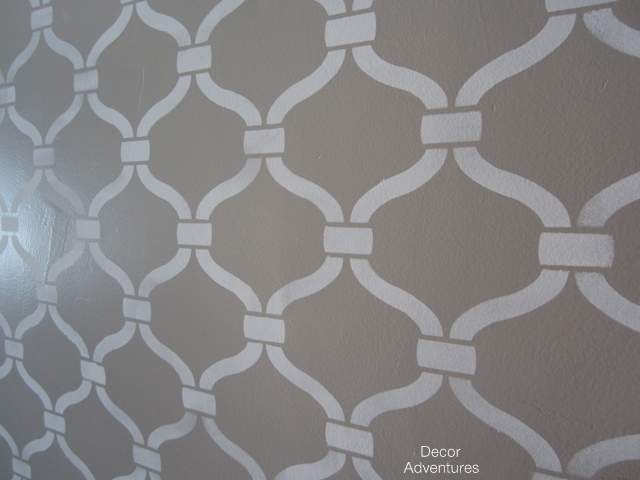 Here are some before and after pictures of the hallway. The stencil gives it such personality! 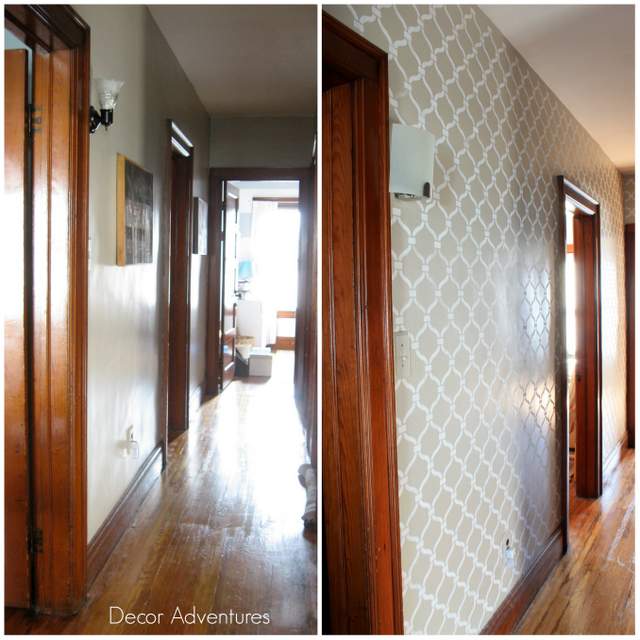 This is the right side of the hallway from the front of the house, where my famous Keep Calm and Carry On poster is. Such a difference right? 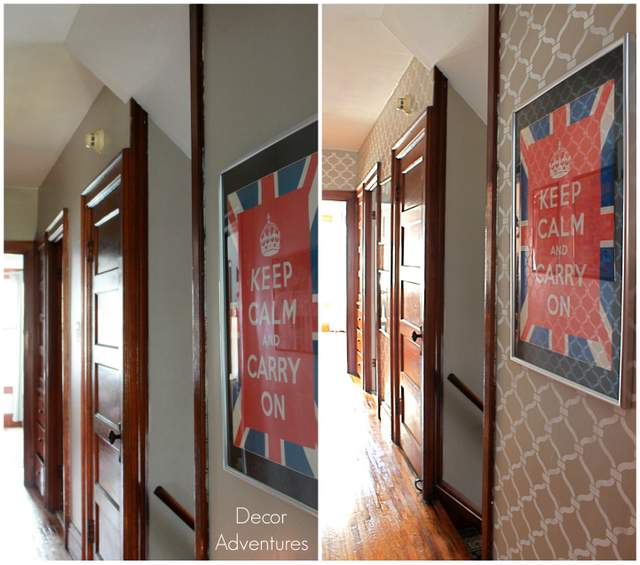 This is now the new view of that part of the hall, looking out from our bedroom. It definitely spices up my view. 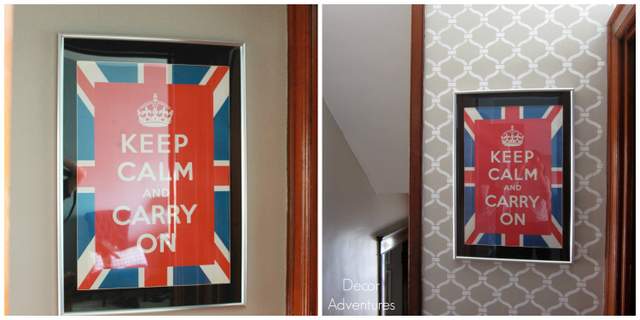 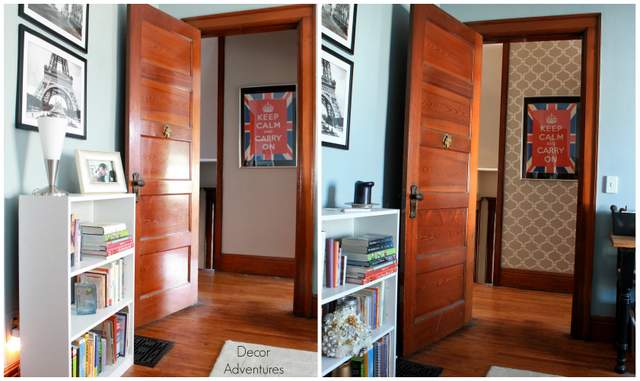 And we since added some of Dan’s artwork to the walls. He is a graphic designer and illustrator and we love having his original work showcased in our home. 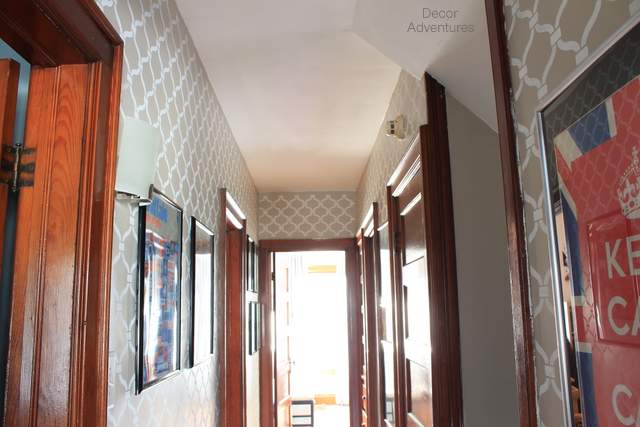 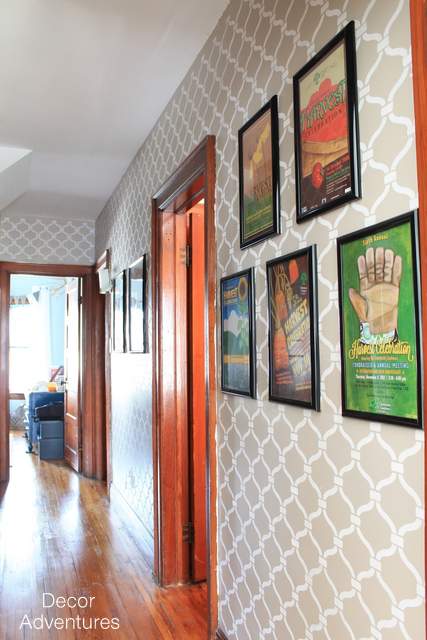 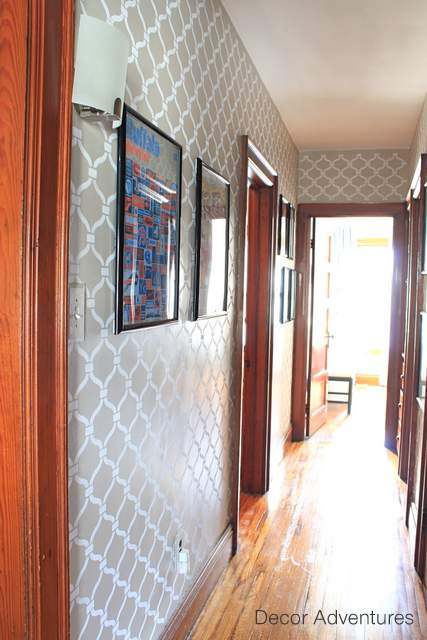 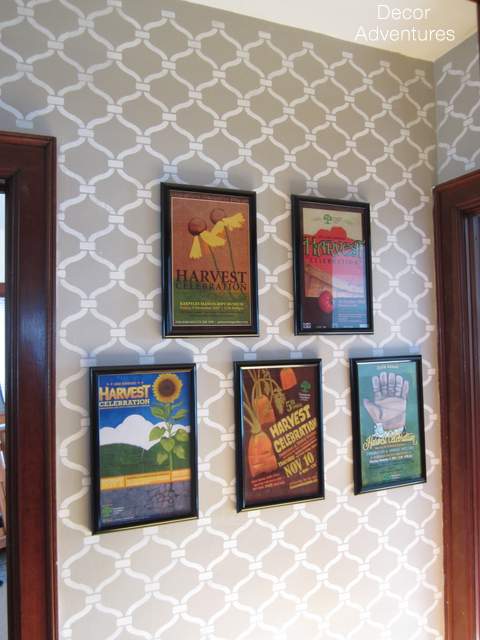 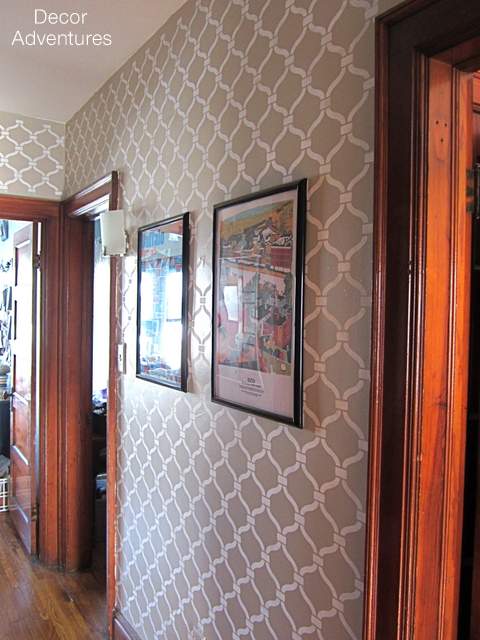 Details of this Project

I love this stencil so much I even used it to make a table runner for the dining room. Did you see it on my holiday home tour? It’s amazing what a different look you can get with a stencil just by the background color and paint you use. And it’s so easy to see how they can be used for crafts and other home decor. 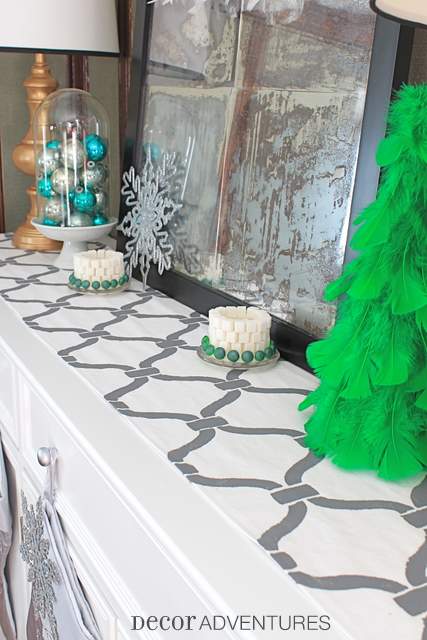 Sharing with Weekend Bloggy Reading at Serenity Now and Creativity Unleashed at One Project Closer’s The Better Half.

Disclosure: I was provided a free stencil to do this project. All opinions on the stencil and project are my own.