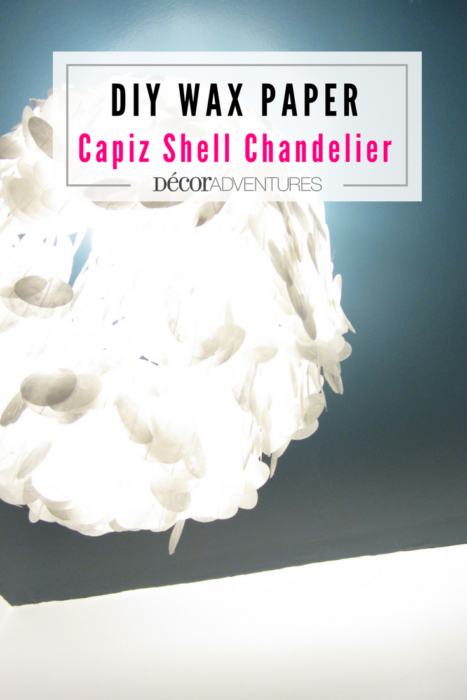 Hello! I’ve got a little how to for you today, it’s how to make a wax paper capiz shell chandelier which we hung in our master closet.  I had seen both real and fake capiz shell chandys and kept the project in the back of my mind for a rainy day – or a closet renovation.

Here’s how to make a wax paper cadiz shell chandelier, get ready for some pictures! Once you have all of your supplies, paint the basket in the color you’d like. I painted mine white to blend in with the wax paper color. I chose this basket since the wires going around it were different sizes, meaning it would give the chandelier layers as I put on the shells. See the small wire circle at the top in this photo actually became the bottom of the chandelier. So the widest circle which is at the top of the basket was the top of the chandelier once it was hung.

And I chose a simple basket so I didn’t have to make a million shells. Four layers was enough. Then prepare your wax paper. I ripped 30 sheets of wax paper, as close to the same size as I could. I didn’t measure because this is kind of a labor intensive project anyway and I knew it wouldn’t matter.

Since I wanted some color to my “capiz” shells I decided to spray paint some of my wax paper. I didn’t spray them solid, just in a random pattern to give some color to the sheets of wax paper. The more random the better anyway since capiz shells are random in color by nature. I used silver spray paint and laid them out in the backyard. This was the only way I could figure out how to do it! If course the neighbors think I’m crazy anyway.

Do this on a non windy day! Then you iron the wax paper together. I ironed 3 sheets, sometimes 2 plain and 1 painted and sometimes 2 painted and 1 plain. It’s all up to you if you paint them or not. I wanted some color variation so I just threw together 3 sheets and ironed them. I believe I painted about 30 sheets and then tore 30 plain/non painted sheets and used a combination of those. Iron them between 2 pieces of parchment paper, which I didn’t find at the dollar store but it’s available with baking supplies or paper goods at other stores. You need the parchment paper because otherwise the wax paper will melt.

The ironing I found was the longest part of this project. I was anxious to get the paper ready to make the shells. Once your wax paper is ironed together you can then start punching out the circles. I recommend a new or sharp circle punch. I think mine is getting a little dull because sometimes the circles didn’t punch all the way around. This is frustrating to say the least and I wasted a bunch of paper doing it. You can see the pattern of the silver spray paint on this paper and how I folded each piece accordion style in the upper right so I could punch more than one at a time. It will get messy people. If circles go astray, take a picture then pick them up later 🙂 Here’s our shiny dining room floor, which is not that red in person. If course this project might have you burning the midnight oil, hence the nightime pictures. Then sew your circles together. Again, I’ve seen people glue them to strips of ribbon, but you can try it anyway you have resources or patience for. The sewing actually didn’t take very long. I just sewed a bunch of strands, then glued them on then sewed then glued and repeat. That way I made enough for what I needed.

My strands were 10 circles long. Once sewn together, you’ll have this. Strands of wax paper circles. I cut mine 10 long because I determined that I would have them over the basket in half, doubling the strand per say, and 5 long was a good length for my basket frame.When sewing them together I didn’t exactly alternate painted paper to non painted paper, again that would have taken way too long. I just grabbed some and fed them into the sewing machine.Don’t worry about the small gaps of thread in between if you sew them. Try not to make too many but the imperfections will add to the flow of the shells once they are on the basket. I kept my circles in a bowl and then fed them into the sewing machine very quickly. I did long lengths of them at a time, then I cut the long strand into smaller ones 10 circles long. Again, don’t waste your time stopping at every 10 circles. You’ll have to cut all that extra thread and it will take forever.  This way to you don’t have to cut any thread between the circles. Now you assemble the chandelier! This was really the quickest part. Just grab a strand, some hot glue and  go.Put a dab of hot glue on the wire part and hang the strand right on the glue in half so you have 5 circles on one half and 5 on the back half. The strand will then hang over the basket wire. I overlapped the strands by about half like this. It will take more if you put them closer together, but the chandy will look fuller also. I felt that this overlap amount would make the chandelier as full as I wanted. Start at the bottom of the basket and work you way up. You don’t want to have to move the strands around to attach them underneath. Make it easy on yourself and work from the bottom up.I hung the chandelier on some shelves in the dining room and just turned it as I glued on the strands of wax circles/shells. Here is what the basket looks like from the inside once you are done. Then you hang her up! Here you can just see the end of the the wire chains from the basket that I hooked onto the little screws that hold a glass bulb to the ceiling fixture. Make sure you paint the chains, because even though they are not visible from the ground, you want them to blend in. I also painted the ceiling fixture white. I love how you can see the shades of silver spray paint in the “shells”. You might even want to paint your ceiling {depending on where you put this} to make the chandelier stand out. I think the effect of the white and silver against the blue is the whole point! Very dramatic don’t you think? So what do you think? Did I leave anything out, anything else you want to know? Think you’ll make one for yourself? I love it, I just might make another 🙂

See the rest of my craft projects here.