Monday’s post on how to remove wood veneer was on this dresser I thrifted a few months ago which I wanted to make into some kind of metallic, industrial looking piece for the foyer. Since it was in rough shape I had to get the veneer off the top specifically before I could work my magic on it. And I didn’t really fix any of the other parts that were missing wood since I wanted it to look a little not-so-perfect.

I definitely wanted to go the metal route so I picked up a quart of Martha’s Precious Metals from The Home Depot.

I read about this product on the web and saw reviewers claimed it does not give a solid color, but a streaky effect instead. While some people didn’t expect this, it was exactly what I wanted, so on the dresser it went. After testing it out on a drawer first, {a good idea with new paints you use}, I realized it was semi-transparent and I should put on two coats of primer to make the dresser as solid white as I could. {I use Kilz oil based primer}. On went coat number two, then I let it dry over night. As soon as the piece was dry, I painted on the metallic paint.

I chose the tin color, which is a very light silver/grey. When you buy this paint it does need to be tinted, just like any other. Martha offers a variety of colors in the Precious Metals collection, I could definitely find uses for some of the others as well. 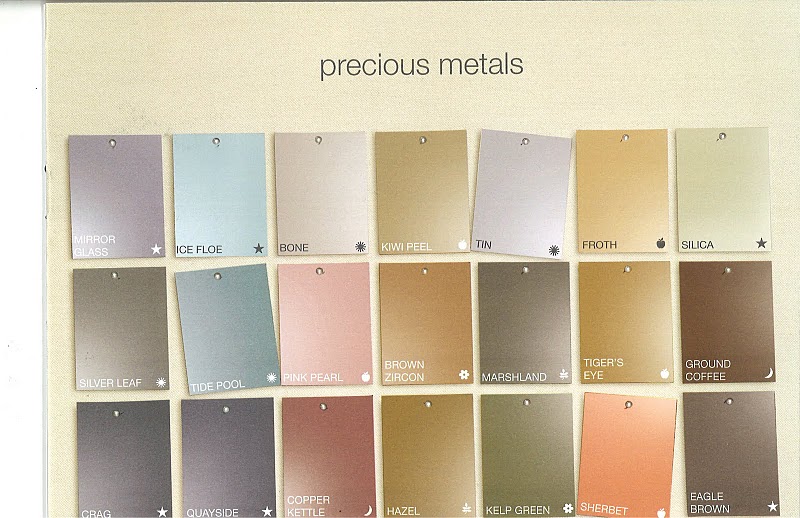 Here is the color I had after two coats. Very light silver and exactly what I was looking for. I did find this paint to be streaky, it does not give a solid color. See the streak across the top of this side panel? That is just a brush stroke in the opposite direction. This is a view of the other side after the first coat of tin precious metal paint. My idea for this dresser was to glaze it. I have never glazed a piece of furniture before and definitely wanted to try out something new. I followed the guidance of Jami at Freckled Laundry who did a faux zinc finish on a piece.

I couldn’t find the exact same metallic paint, which is why I got the Martha brand, but the others I picked up at Michael’s. I combined a lot of glaze to a smaller amount of paint, first in black. My idea was to swipe some on and then off with a different rag. It worked for the most part. Just like the Karate Kid, glaze on, glaze off.

Glazing is an art, there is no right or wrong way to do it. Even though I wasn’t 100% on this look, I kept going and worked on the other parts of the dresser and drawers. I repeated the same technique with the white paint and glaze and this is what I ended up with.

A tiger for a dresser. Not at all the look I’m going for. I even let it dry and came back the next morning to see if it had magically transformed to the metal look I wanted. That was my attempt at glazing. Key word = attempt. Maybe I didn’t put enough on, maybe I mixed it wrong? I realize I could have concentrated the glaze/paint in certain areas but was kind of trying it out. That didn’t work as I expected.

Take two up next! Disclaimer: I’m not sponsored by any of these companies or products shown here.